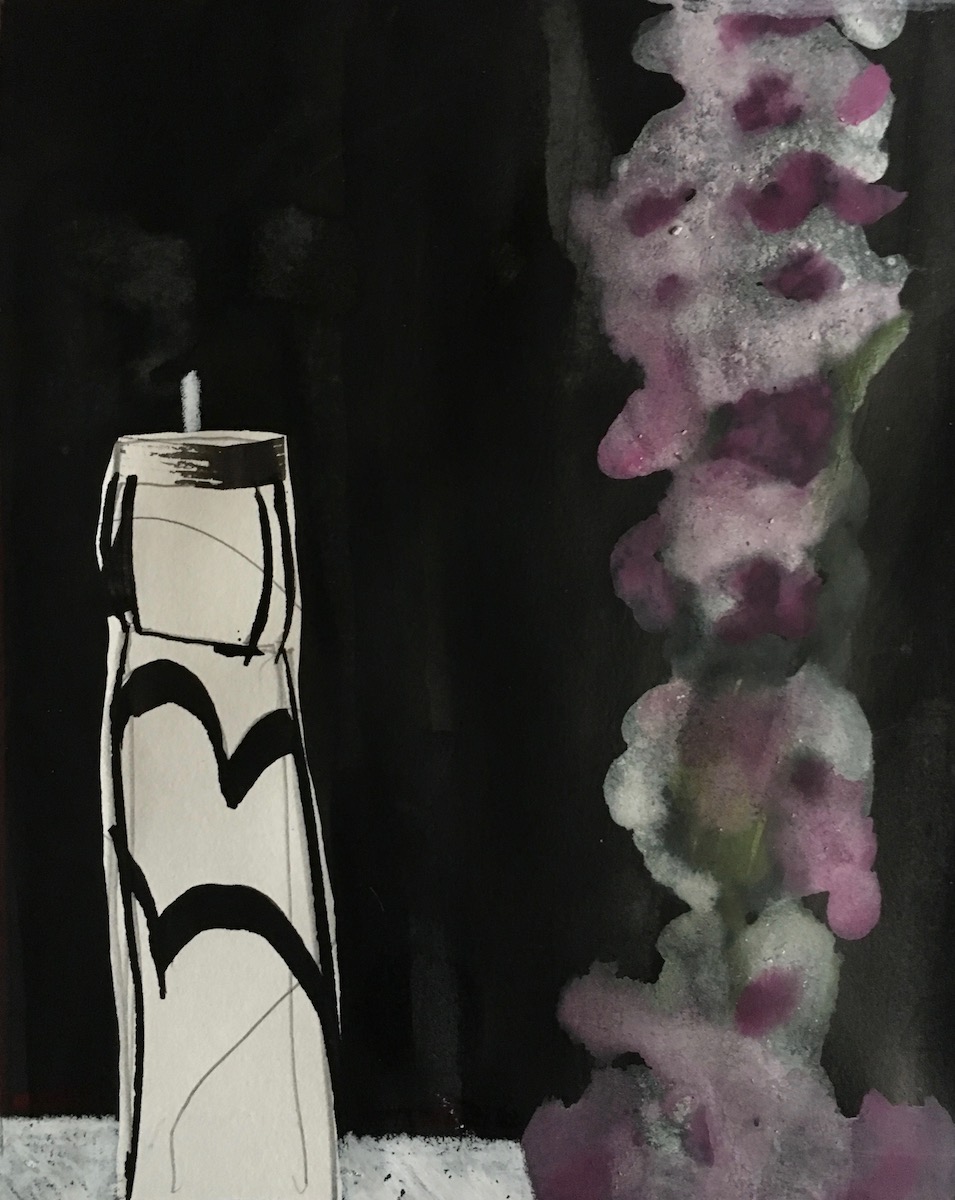 I’m very interested in paint as its own thing, and in part my imagery is developed through paint itself — its application, its visceral self, its manipulation by pulling and teasing an image from the primordial ooze of colored grease onto cloth. Beginning a painting, I intuitively pick up a tube of paint, and as I proceed, one pigment begs to befriend another. My process is not a matter of working from sketch to larger drawings to painting. It’s more about the final image consisting of elements saved through the painting process and how it stays becomes the question. Color is built up, and then it is shattered. My love of the materiality of paint has led me to experimentation with techniques that engender an “archaeology of surface,” including staining, scratching, pentimenti, line, color, forms, scraping, rubbing, transparent, opaque, texture, printing, drawing, thick/thin mediums, marble dust.

I don’t see my work as interior design where a painting needs a little of this or that, red there or blue here. I like to see myself more as a shaman calling forth an alternate reality. Visual language is wrested from the painting medium while in its most viscous state, striking a chord deep within my psyche. I build upon elements that are felt more than defined, combing them out, distilling and refining their essence, and fusing figures with color fields: a certain making sense out of all the random elements of imagery and effects that occur on the surface at the same time. Time plays into the process by the rate and speed of my hand before the oil paint dries. I have several paintings going on at one time, and if I lose myself with one I let it dry, roll it up and return later. Creating a painting, for me, is possessed of an unbridled creativity that aspires to “flesh.”

With colors and shapes dancing around in my head from the outer world into a filter of psychological space through which they emerge. I gather, assimilate, and synthesize images. Enigmatic, exaggerated forms bubble up from my memory bank of patterns, motifs, and objects from ancient to modern. I play at the table of dissociative imagery and a grab bag of Western and world traditions, ruthlessly simplifying and purposefully aimless. I find much of my creativity in messy and nostalgic delivery systems: urban detritus of littered streets, a childhood memory, basement clutter, antique shops storing vast arrays of material culture. Associated meanings and recognition are defamiliarized or jettisoned. Because of how universal forms are placed aside one another a sense of developed meaning exists, elevating the usual and ordinary into the unusual, exotic, perplexed and unexpected.

I like work that wanders freely between one place and another. Meandering and varied, most of my paintings invite you in for conversations, but then you don’t know where to sit. It’s a quiet look at another world, and it is work more about keeping secrets and scoffing at what we think we know rather than extolling virtues. That we have ever understood the world around us is a lie in a sense, because it is of our making.